Brandy is undoubtedly one of the finest and most exquisite aged liquors in existence. Here are some of the most interesting facts about brandy so that you can become an expert on this majestic and genuine drink.

¿WHY IS IT CALLED BRANDY?

In the 16th century, a Dutch chemist, faced with the need to reduce the costs of storing and transporting an excessive wine harvest, came up with the idea of reducing its volume by distilling it. He called the result 'brandewinj'. As the term was impossible for the English to pronounce, they decided to rename it brandy.

There are many factors that create the distinctive aromas and flavours of Brandy de Jerez. The use of Airén and Palomino grapes, the criaderas and solera ageing system, the particular climate of the Jerez area and the ageing in American oak casks, which previously contained the best sherry wines. Unique and unrivalled. 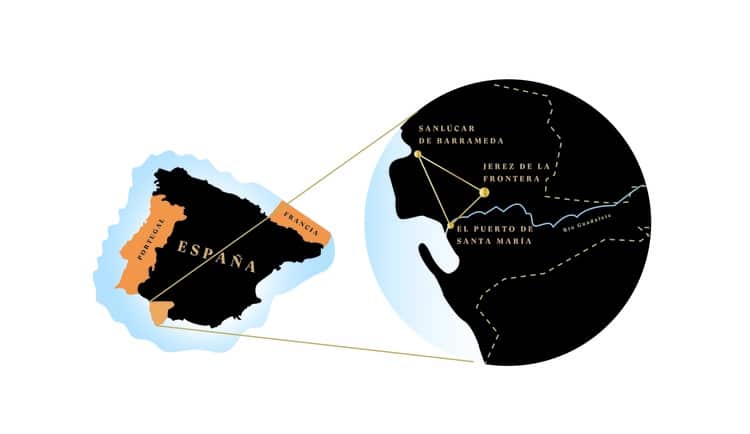 THE DYNAMIC SYSTEM OF CRIADERAS AND SOLERA: A SYSTEM NATIVE TO JEREZ.

The criaderas and solera system is an ageing system that originated in Jerez in the 19th century and consists of blending young distillates with older ones. In the Sherry Triangle, different systems of criaderas and solera can be found, depending on the number of scales or levels that the butts are stacked in. Thus, for example, a solera with three levels of butts has three tiers. The highest rows are occupied by the criaderas, which are the butts that hold the youngest brandy, while the solera holds the oldest brandy, occupying the rows closest to the floor.

This replacement is known as the rocío. In turn, the wine extracted from the first criadera will be filled with wine from the second criadera, which will take us up one step at a time to the top tier, or "sobretabla", which will be topped up with new wine.

It is important to note that the extraction or saca is always partial, and never accounts for more than a third of the contents of each cask. Therefore, as the casks are never completely emptied, the product of the soleras will always be a mixture of brandies from each and every vintage, which means, on one hand, that the brandies produced using this system are never labelled with a vintage designation, and on the other hand, that the quality of the product is maintained year after year.

WHAT IS THE DIFFERENCE BETWEEN BRANDY AND COGNAC?

The four main differences between Brandy and Cognac are the location, the raw material, the distillation, and the ageing process. 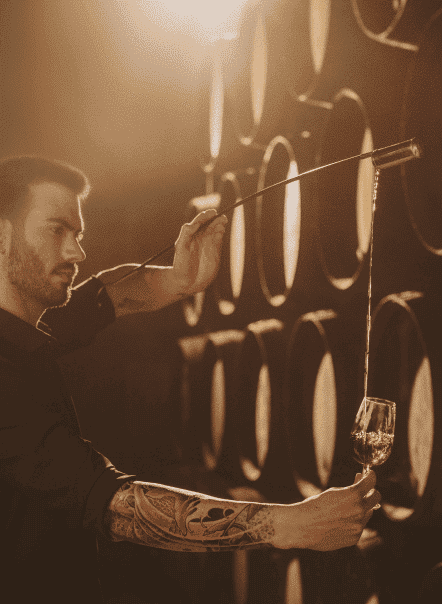 Brandy is made from Airén or Palomino grapes, while Cognac can only be made from three varieties of white grapes: Ugni Blanc, Colombard or Folle Blanche.

Finally, Sherry Brandy is aged in American oak casks that previously contained sherry wines. This type of oak has a high tannin content, tight grain, and is resistant to leakage, which produces creamy aromas; whereas Cognac is aged in new French oak casks, such as Limousin or Tronçais, a medium-grain, hard and fibrous wood which emanates spicy aromas.

WHAT IS THE DIFFERENCE BETWEEN BRANDY AND WHISKY?

Brandy and whisky are the two most renowned noble beverages in the world. Both distillates are completely different from each other, although in many occasions they share certain parameters, such as the use of sherry casks, turning these emblematic casks into an infinite source of quality and finesse, a flagship in the world of spirits.

Brandy is produced by distilling grape wine, while whisky is distilled from cereals such as malted barley, rye, and corn. Brandy de Jerez, on the other hand, is aged in American oak casks that have previously aged sherry wines. The criaderas and solera system is used for ageing. Whisky, on the other hand, is aged in oak casks from the USA, Hungary, France, etc., that have previously contained bourbon, sherry or port wines.

Although whisky can be produced internationally, a Brandy de Jerez can only be produced within the Sherry DO, which consists of Jerez de la Frontera, Sanlúcar de Barrameda, and El Puerto de Santa María.

Whisky lovers, once they discover Brandy de Jerez, also become devotees of this type of spirit. 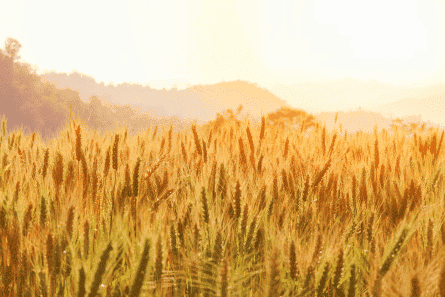 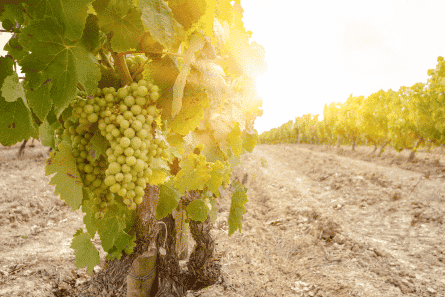 WHAT IS THE DIFFERENCE BETWEEN BRANDY AND RUM?

Rum is an alcoholic beverage made from the fermentation of sugar cane juice and its derivatives, such as molasses. It undergoes fermentation and distillation processes.

Furthermore, rum has no defined production methods but is based solely on traditional styles that vary between locations and distillers. It is mainly produced in the Caribbean and Latin America.

It is mainly produced in the Caribbean and Latin America. 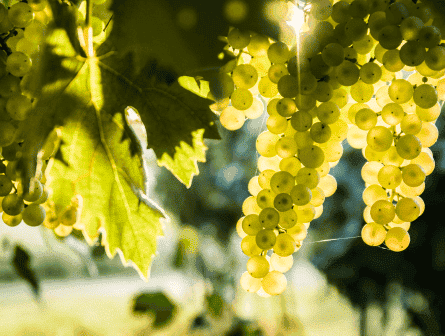 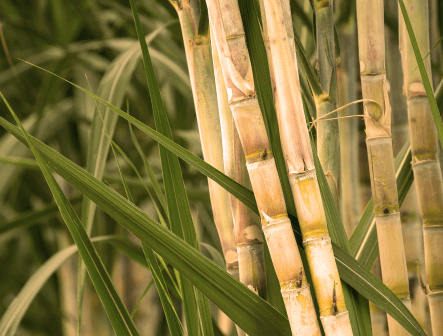 The stone walls of the traditional cellars are covered with a black layer of fungus that takes advantage of the steam from distillation to survive. It also proliferates in the underground cellars, as do spiders. These creatures are the winemakers' best allies, as they feed on termites, the main predators of the wood in the barrels. 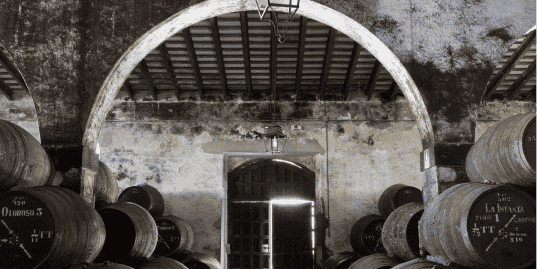 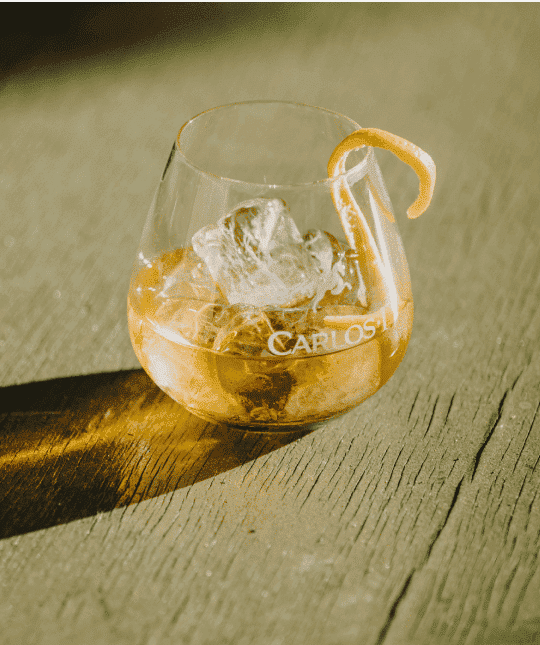 Brandy is aged in oak casks. The longer it spends in the casks, the more complexity and nuances they bring to the brandy. When brandy is stored in these casks, it acquires a darker shade. Different brandy makers add colour to give both a sweet touch to the drink and a caramel colour. For this reason, a dark brandy is not always synonymous with a brandy with decades of ageing.

SO MUCH WINE, SO MUCH BRANDY

Every year more than 50 million kilograms of grapes are used to make Brandy de Jerez, which translates into a need for more than 10,000 hectares of vineyards. With such dimensions, it is not surprising that Spain is known as, "The great vineyard of the world"

Brandy is obtained after the distillation of wine, which after a long maturation process, results in a much more noble and refined drink. It takes about 3 litres of wine and about 4 kilograms of grapes to produce just one bottle of our Carlos I brandy.